The package – which was reportedly suggested to a number of contestants and would include interviews, complimentary articles and promotion on the station’s mobile app – was billed NIS 50,000 ($14,921) by the network, a right-wing channel sometimes equated with Fox News and officially known as Now 14.

Two aides to Likud lawmakers tell Army Radio that Channel 14 representatives — insisting only on face-to-face talks — have offered to invite candidates for interviews ahead of the Likud party’s primary August 10.

Although networks are allowed to publish paid content, they must be clearly identified as such under broadcast regulations.

Army Radio said that before publishing its report it found a number of articles on the Channel 14 site which should have been marked as paid content but were not. After the radio station asked Channel 14 for a response, the website was changed to show that these posts were paid content, according to the radio report.

In a statement responding to the report, Channel 14 said the offer it had made to MPs was only for content on its website and app, “unrelated to the channel’s programmes”. The network added that “this was made clear to those who were interested.”

However, another lead contestant later told Army Radio that when he inquired about an interview on the network’s broadcast program, he was told that NIS 5,000 would buy him a place in the studio.

The revelations came as Zehava Galon, a former Meretz party leader who is running again for party leadership, asked the attorney general to open an investigation into opposition leader Benjamin Netanyahu over allegations that he used channel 14 for his own political ends.

In a letter to Attorney General Gali Baharav-Miara, Galon wrote that Netanyahu, the leader of the Likud party, should be questioned on suspicion of committing crimes of fraud, corruption and breach of trust.

“The Israeli viewer is exposed every day to a despicable propaganda channel that operates in the name of a criminal defendant,” she wrote to Baharav-Miara in a letter submitted by attorney Daphna Holetz-Lechner.

Galon referred to a Walla report from Tuesday which cited a recording of a Channel 14 employee explaining how a segment earlier in the week aimed to discredit Home Secretary Ayelet Shaked, leader of the new Zionist Spirit party. , which competes with Likud for right-wing votes.

The employee was referring to a Channel 14 interview on Monday with the wife of Moshe Saada, the former deputy head of the Justice Ministry’s police internal investigations department. Last month, Saada alleged that senior figures in the country’s judicial establishment, including the former state prosecutor, had ignored misconduct in recent years by the then police chief, fearing that it does not detract from efforts to prosecute the former Netanyahu, who is on trial for corruption. 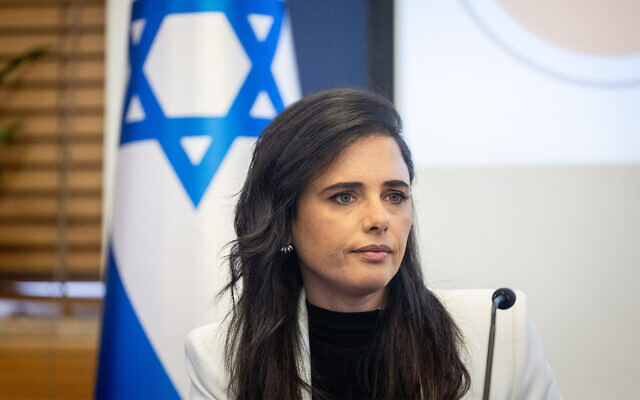 Saada’s wife, Naomi, told Channel 14 that Shaked, who was justice minister when the alleged misconduct was taking place, was aware of the issues at the time. Channel 14 captioned the report with “Shaked knew – and kept silent”.

Both Shaked and Moshe Saada quickly rejected the request.

On Tuesday, Walla reported that she had obtained a phone recording from a Channel 14 employee saying the purpose of Naomi Saada’s interview was to spread that “Ayelet Shaked knew”.

Channel 14 replied that Naomi Saada’s interview “is a journalistic document of great importance to the public”, and that it supports the decision of the editors who chose the title of the article.

Netanyahu is currently on trial on multiple corruption charges in several cases, including granting favors to Shaul Elovitch, Bezeq’s majority shareholder, in exchange for what amounted to editorial control over the Walla news site. by Elovitch. Netanyahu denies all charges against him.

Supporting The Times of Israel is not a transaction for an online service, like subscribing to Netflix. The ToI Community is for people like you who care about a common good: to ensure that balanced and responsible coverage of Israel continues to be freely available to millions of people around the world.

Of course, we’ll remove all ads from your page and you’ll unlock access to great community-only content. But your support gives you something deeper than that: the pride of joining something that really matters.

Join the Times of Israel community Join our community Already a member? Log in to stop seeing this

You are a dedicated reader

We’re really glad you read X Articles from The Times of Israel over the past month.

That’s why we launched The Times of Israel ten years ago – to provide discerning readers like you with must-read coverage of Israel and the Jewish world.

So now we have a request. Unlike other media, we don’t have a paywall in place. But since the journalism we do is expensive, we invite readers to whom The Times of Israel has become important to support our work by joining The Times of Israel community.

For just $6 a month, you can help support our quality journalism while benefiting from The Times of Israel WITHOUT ADVERTISINGas well as access Exclusive content only available to members of the Times of Israel community.

Thanks,
David Horovitz, founding editor of The Times of Israel

Everyone’s favorite home improvement couple Chip and Joanna Gaines have announced the exact launch date for their linear version of Magnolia Network. The network, which will be a pay-TV offering, will officially launch on January 5, 2022, with a slate of new shows to round out the lineup. On January 5, 2022, the DIY Network […]