New data from Ampere Analysis claims that a combined Disney+/Hulu deal would account for around 30% of the top 100 titles of any subscription streaming service in the US – well ahead of Netflix’s 23% market share .

Among the 100 titles are shows from Disney’s Marvel Studios or originals from Lucasfilm and Hulu such as “Only Murders in the Building” and “The Handmaid’s Tale.” 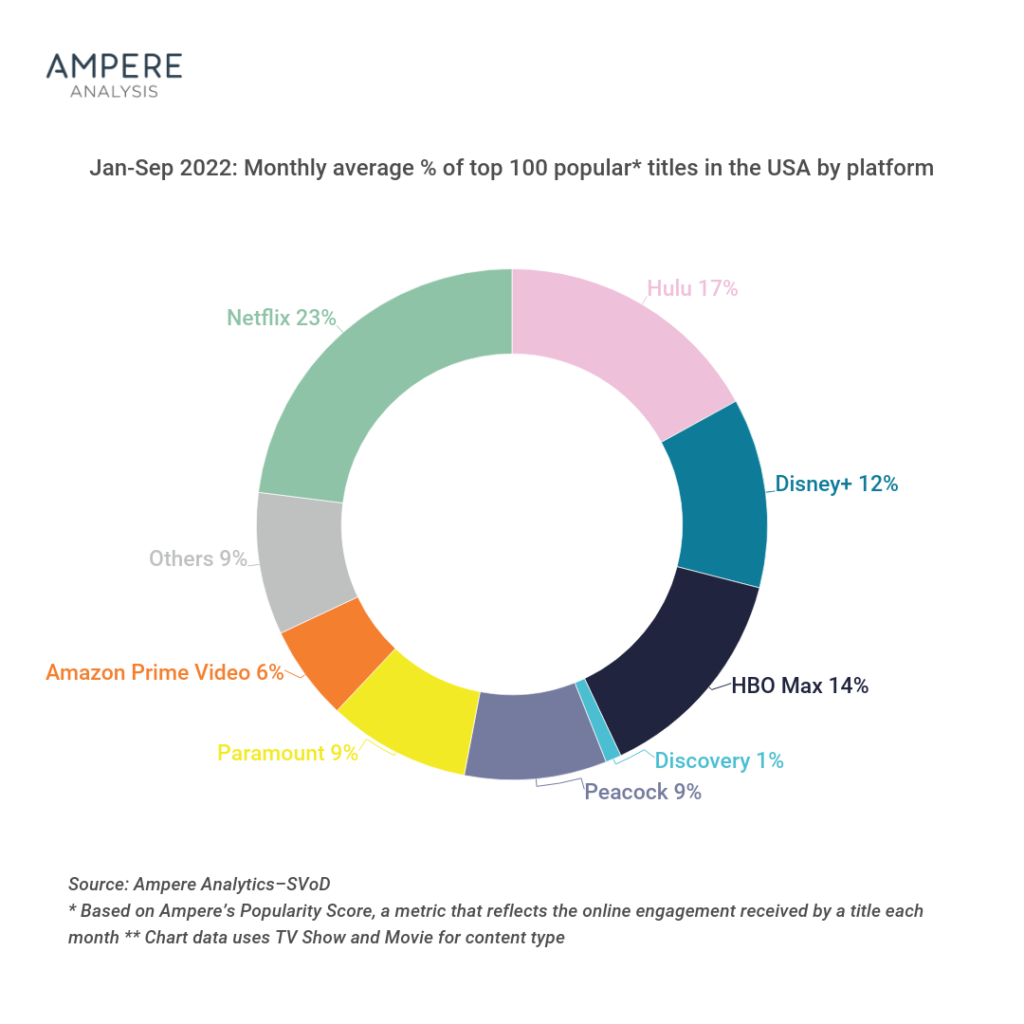 One of former Disney CEO Bob Chapek’s big goals was to consolidate ownership of the Hulu streaming platform, which also includes online television service Hulu + Live TV. Disney currently owns 66% of Hulu while NBCUniversal owns 33%. The latter is also interested in owning the platform, according to Brian Roberts, CEO of parent company Comcast.

Comcast and Disney reached an agreement on January 1, 2024 that gives Disney the option to acquire the remaining 33% stake for as much as $27.5 billion. Chapek wanted to speed up the sale date – a strategy that now sits on the shelf.

A merger seems logical to Ampere analysts, as Disney’s share of Hulu content has grown significantly, suggesting the company has continued to invest heavily in the platform. Since September 2016, the proportion of Hulu’s catalog for which Disney owns distribution rights has tripled, from 6% of all movies and TV shows to 19% by September 2022.

Meanwhile, major studios without streaming platforms have reduced their contribution to Hulu’s content roster (from 81% in 2016 to 71% in 2022), and those with their own streaming services have generally maintained or reduced their contribution. Specifically, the combined content from NBCUniversal, Paramount Global, and Warner Bros. Discovery now accounts for less than 10% of all TV shows and movies on Hulu.

“The threat of other popular or critically acclaimed titles leaving Hulu for competing platforms is a concern as engaging content is essential for subscriber retention, especially as the domestic SVOD market nears saturation. “said Christen Tamisin, analyst at Ampere, in a press release. “This risk strengthens the case for Disney to merge Hulu and Disney+ into one platform.”

Meanwhile, the continued removal of content from third-party content holders Hulu to support new services like Peacock, Paramount+ and HBO Max poses a threat to Hulu’s competitiveness, according to Ampere. The streamer has already lost titles such as “America’s Got Talent” (for Peacock), movies and TV shows set in the Star Trek universe (for Paramount +) or “Family Matters” (for Max).

If major studios reclaim their proprietary content, Hulu could lose 10% of its overall catalog. That figure rises to 37% of Hulu’s 100 most popular titles, according to Ampere.

“On the other hand, the complementary catalogs of Disney+ and Hulu mean that a combined platform would have a more diverse content offering – similar to that of other major players in the market – than the two stand-alone platforms do. currently have,” Tamisin said. “While the Disney brand has long been associated with family-friendly content, Hulu has a broader general appeal, offering a wide range of genres and more adult-oriented titles.”

Concordia will triple the capacity of the Mel Hoppenheim School of Cinema’s film production programs by 2024, welcoming more than 220 new students from nearly 800 annual applicants. The expansion aims to ensure that Quebec’s thriving film and television industry benefits from the creative and highly skilled graduates who have cemented the school’s reputation over […]

Game logos appear in half of UK children’s football programs

A new study from the UK has looked at the prevalence of game logos in football club programmes. According to the study, at least 56.8% of the teams examined had a strong presence of gaming logos in the children’s sections. The study, led by Steve Sharman, Catia Alexandra Ferreira and Philip Newall, focused on 44 […]

Local Pender Harbor SAR service operates through some basic and local safety programs available to residents of the Pender Harbor area. Royal Canadian Navy Search and Rescue Station 61, Pender Harbor would like residents and visitors to the Sunshine Coast to know how to reach us if they require our assistance: cell phone #727 or […]